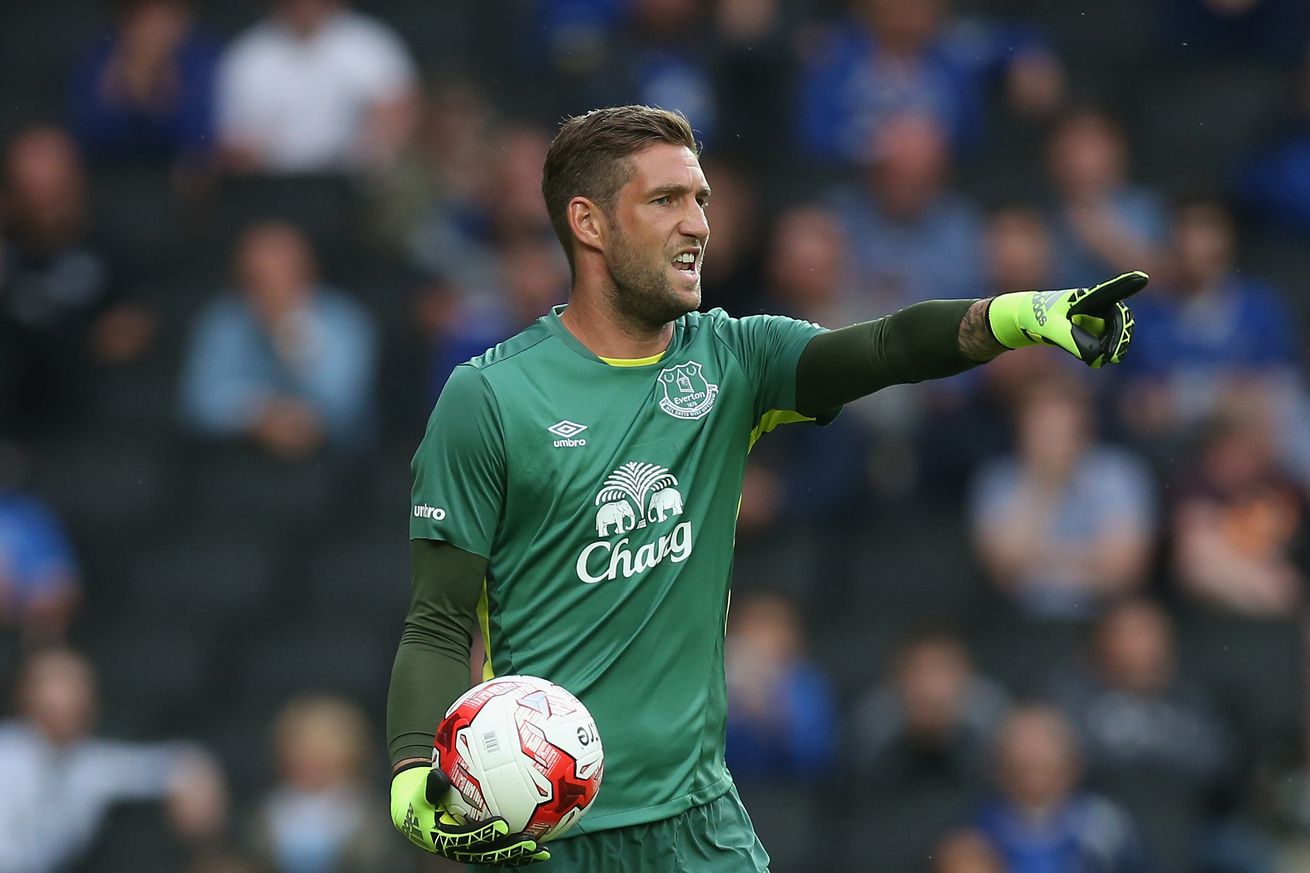 A quartet of RBM writers talk about what the Blues are going to doing between the sticks.

Goalkeeper was a position that was in the tried and true hands of Tim Howard for nearly a decade. However, over the last year or two, Howard’s form dipped and he was relegated to the bench. This summer, he went back to his native United States for regular playing time and a nice pay check.

That made us think, “Are Everton’s goalies good enough?” We thought it would be fun to bat that topic around the RBM newsroom a bit. Here is what some of our writers had to say about it.

1. Of the current pair, who do you prefer to be the starting goalkeeper when Everton opens against Tottenham on August 13? Joel Robles or Maarten Stekelenburg and why?

Stekelenburg. I admittedly don't know a ton about the Dutchman, but in Robles' time with Everton, he's proven to be only one thing — a reliable backup. I certainly don't cringe when I see his name on the team sheet, but he's done little to show that he deserves to be a starter, even after being given an extended run at the end of last season.

Roll with Joel. Robles was able to get consistent matches in once the club made the decision to move on from Tim Howard last season. There are still many questions about his ability to be a keeper in the top flight but he's the best option the Toffees have at the moment.

Stekelenburg is a nice to have as a backup but I don't see him as a Premier League regular. Stekelenburg performed admirably for Southampton who were much in need of his services but once Fraser Forster returned in January, he only saw the pitch from the bench. I believe that Koeman brought him in to mentor Joel or another keeper that might be brought in but he does not see him as a true number 1.

Probably Stekelenburg by a hair. Super experienced, decent track record. Probably commands the area a bit better and marshals the defense better. Though if Joel isn't good enough to start with Howard gone, you wonder what the point of keeping him around has been.

In terms of ability I think they are fairly similar but if I was to pick one I would probably say Stekelenberg. I’ve not seen much of him in recent years but he looked solid enough in pre-season. However, the main reason why I feel he should start is his relationship with Koeman. They worked together at Southampton, of course, and Koeman must trust Stekelenberg enough to have made the effort to bring him to Goodison Park. Robles on the other hand does not appear to have the faith of his manager if Koeman’s body language during the pre-season win at Barnsley is to be believed. The Dutchman was regularly seen shaking his head when Robles made errors at Oakwell, suggesting he has already made his mind up about the Spaniard. Robles is a solid enough ‘keeper who did a decent job in the second half of last season but if the manager doesn’t believe in him he shouldn’t be in the side

2. How confident are you in the current duo of keepers heading into this season?

Not particularly confident. It appeared earlier in the transfer window that Koeman was interested in bringing in another keeper after Stekelenburg, but nothing came through. If the manager isn't overly confident in things, I certainly won't be either.

Not very. I like Joel but I'm in the camp that's unsure of him. He has flashed his abilities but he's also shown a lot of inconsistency and has made many mental errors. I recognize that he has grown over the past couple of seasons but he is still yet to take that big step to being a Premier League keeper. Two big things that he has working in his favor are his physical attributes (6'5") and his age (26). He is about to enter his prime so there's hope that we have not seen the best of him yet.

Stekelenburg still has some good matches left in him though I don't see him as a match-to-match keeper. He will probably play in cup competitions and serve to push/mentor Joel in training.

Eh. Neither really strike me as anything more than mid-to-lower-table keepers. Stekelenburg has been around but that doesn't necessarily mean he's good, and there's perhaps decent reason to think he's not all that good. Joel is still pretty young at 26 so there could be upside there, but it feels a bit like wishful thinking.

I think they could do a job for a few matches but neither of them are the answer in the long-term. Koeman simply has to bring in a long-term replacement for Tim Howard before the transfer deadline. One of the Dutchman’s priorities this season is to tighten up a leaky defence that ultimately hamstrung Roberto Martinez’s reign at Goodison Park. An established No.1 goalkeeper is central to that plan.

3. There have been very few links between Everton and top quality keepers recently. Does that concern you?

Not really. A top quality keeper — a Neuer, De Gea, or Buffon — can win you matches, no doubt about it. But look at the clubs and countries that have had success in the last year or so. Leicester City, Real Madrid, Portugal, and Chile — just to name a few — are Schmeichel, Navas, Patricio, and Bravo the reason those teams won competitions recently? Far from it. All are steady, reliable keepers who will make the saves they ought to and occasionally steal a goal, but none are in the world's top five keepers. The Toffees, provided they bring in additional talent among the outfield players, don't need to be any different. You don't need an elite goalkeeper to be successful, just a decent one.

Yes, I am concerned about the lack of news tying the club to a top keeper. This has been one of our weaker positions the past two years and the Toffees do not seem to have much in the pipeline for the future. Though there are other positions that need strengthening, going into the summer I had expected the club to go after a proven number one that would be around for years to come.

Kind of, yeah. There are probably bigger priorities in the team but I would consider the squad somewhat incomplete without a top GK.

Not particularly. I have faith in the club to get deals done quietly. Most of the rumours have stemmed from journalists making assumptions regarding the departures of John Stones and Romelu Lukaku or agents seeking to secure improved contracts for their clients. There is still a month to go until the end of the transfer window so I’m still optimistic we will see a new face in goal before September.

4. Should Everton be in the transfer market for a another keeper? If so, who would you realistically like to see them go for and how much of the transfer budget would you be comfortable shelling out for a keeper?

Probably not at this point. As I said before, if you have a keeper you can rely on to make the plays he ought to make and who will avoid making big mistakes, you're in a decent place as long as you have a good team in front of him. Given all the other places Koeman could use to invest in, keeper should be at the bottom of the pile at this point, at least until Stekelenburg proves to be unworthy of trust.

Yes, Everton should definitely be on the lookout for another goalkeeper. My preference would be Jack Butland; but he would be the preference for countless other clubs. Also, I don't see Stoke selling him; at least for a fair price. With that said, two other proven keepers that I wouldn't mind making a run at would be Fraser Forster and Wojciech Szczesny.

There's the obvious connection between Koeman and Forster because of Southampton. Also, I'm not sure of how their relationship worked last season but linking up with Stekelenburg again would help provide some consistency in training and mentoring. Forster is going to cost though, maybe £15m or more. Considering the importance of the position, I would be fine with shelling that amount or a little more out for someone like Forster.

Szczesny is a little bit younger and a little bit cheaper than Forster. He has been deemed as excess at Arsenal and spent the last season on loan as Roma. He is another proven keeper and could step right into the role at Goodison Park. Arsenal seemingly want to offload him so he could be got at a value, but he is a wanted man. I would think that he would cost between £10-13mn.

I think they should be looking at other options, and for all I know maybe they are. I don't think splashing mega-inflated bucks on a Butland or the like is the answer but maybe instead finding a somewhat proven guy who isn't starting at his current club for whatever reason (Michel Vorm?) or a young keeper from the continent looking to make the step up. Pricewise, I'd be pretty uncomfortable paying more than 15 or 20 million pounds for a keeper.

A new No.1 goalkeeper is essential so it has to be a priority in the next few weeks. My first pick would be Southampton’s Fraser Forster. However, he has only just signed a new six-year contract so is unlikely to be available, even for silly money. Plus I suspect Koeman would be reluctant to rock the boat at Southampton still further following his acrimonious departure from St Mary’s. My next choice therefore would be Jack Butland at Stoke. Again he is under a long-term contract but I do feel he could be prized away with the right offer. If Farhad Moshiri’s transfer budget of £100m is true I would have no qualms about Everton bidding upwards of £30m to bring him to Merseyside.

Thanks to Adam, Ryan, Mike and Tom for their help with this piece. Check out their work on the site and, if you like, give them a follow on their respective Twitters.

As for Royal Blue Mersey itself, you can find us on Twitter as well (@RBMersey) or on Facebook (facebook.com/rbmersey), where we are really trying to build the blue army, so likes and follows are always appreciated. Thanks for reading!