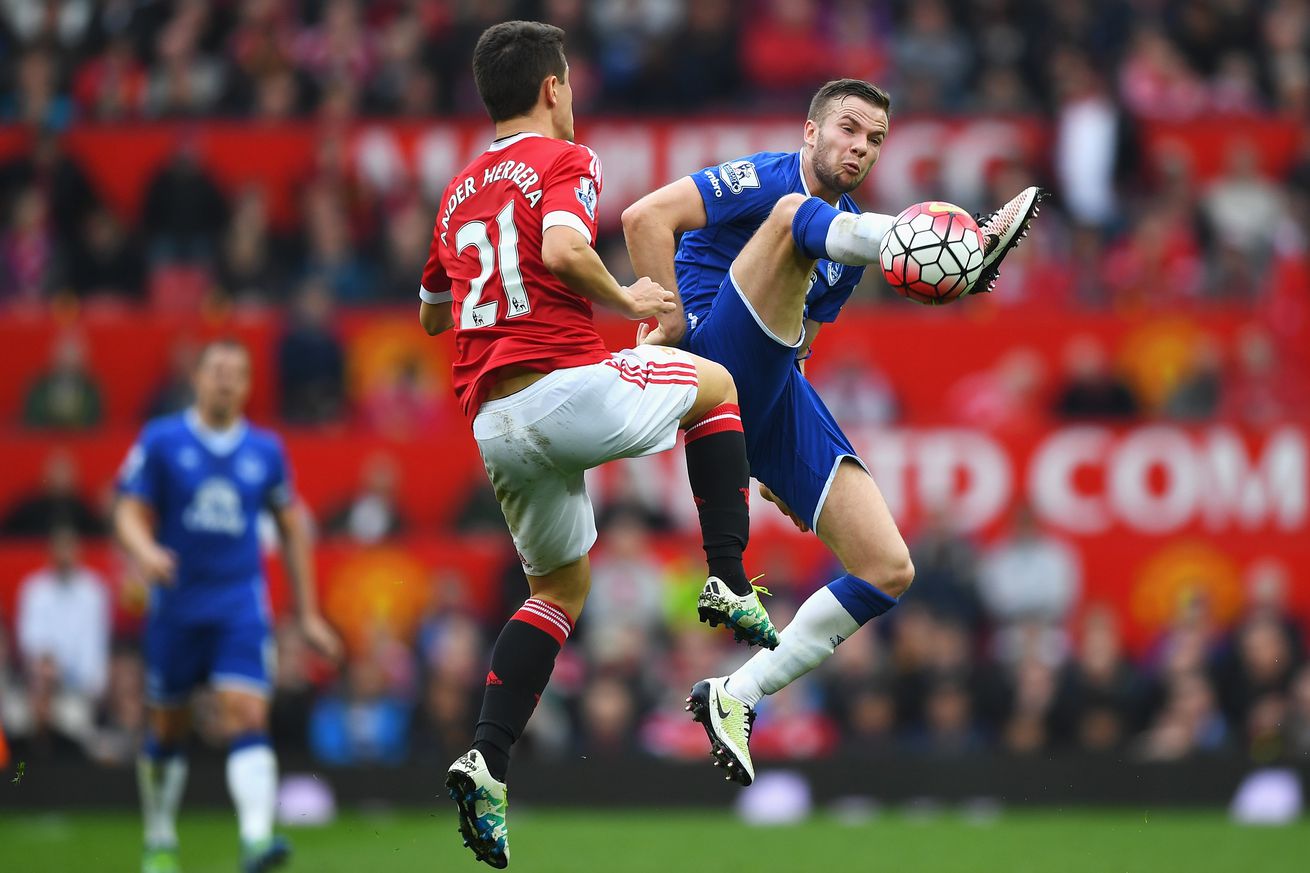 My initial impression when Everton took the field against Manchester United on Sunday was that they were playing a kind of 4-3-3 in possession, with Ross Barkley at the center of a midfield trio and Aaron Lennon and Gerard Deulofeu flanking Romelu Lukaku:

I was intrigued by this to some extent–at least Martinez was trying something new. As I've noted before in this space, both the game film and the numbers have indicated this season that opponents have found Everton to be an extremely easy team to penetrate. Given that United were the direct beneficiaries of Everton's largesse in October's 3-0 demolition, it seemed reasonable for Martinez to keep three men in the midfield, try to clog up space, and hit balls on the counter attack up to a very pacy threesome of forwards. In defense, the midfield could shuffle over with one of the wingers dropping back to form two banks of four. In the absence of Gareth Barry, it was never likely that Tom Cleverley and James McCarthy could provide enough protection for the center backs, so initially I didn't hate the idea of restraining Ross Barkley a bit to help recycle possession.

Needless to say I feel a little stupid now given what actually unfolded. What I just described happened for maybe a few minutes, but it wasn't long before I realized I was pretty wrong. After Lennon started drifting more and more from what I initially thought was his position on the left wing, it became clear that really he was playing in a mobile central role behind Lukaku in something like a 4-4-1-1. Adam already did a pretty spot-on job here of listing off all of the ways in which this went horribly wrong: the way Barkley couldn't get forward, how Lukaku's only service was was from hopeful long balls, and of course how Tom Cleverley ended up, once again, in a situation where his chief contribution to the game was to neutralize his own team's attacks. It's this last bit that I want to focus on, because I think it really encapsulates what makes Roberto Martinez so frustrating.

First let's talk about Mr. Cleverley, who has always been a bit of an enigma. A product of Manchester United's youth academy, his initial burst onto the scene was on loan at Roberto Martinez's 2010/11 Wigan side. After an injury knocked out the bulk of the 2011/12 season, he was a semi-regular feature in Ferguson's farewell title-winning team–a spell that earned him a few England caps–before then becoming one of the main scapegoats of the Red Devils' subsequent collapse in 2013/14 under David Moyes. A loan revival at Aston Villa seemed to allow him to regain his confidence, and when it became clear that United would not renew his contract, it was no surprise which manager jumped on the free transfer.

Just for fun, below are some things that have been written and said about Tom Cleverley during his career. Try to get through these without a chuckle.

So what's my point? Well, you read through those quotes and you get the image of a player who came with a bit of pedigree, found some moderate success with a good team at a young age, then fell of the wagon a bit, at which point most people justifiably concluded his performance was not up to par. Because of that early high-profile success, though, the player carried around an aura of having more talent than he was actually showing, hence all the notions of "potential" and "could be good again".

Here's the problem though: Tom Cleverley is 26 years old, which isn't that young, especially for a midfielder. Also, he's not very good. In fact, there may not be one thing that he does that somebody else at the club in his position can do better. Let's look at some of his numbers this years compared to his teammates, first on offense. All metrics are rated per 90 minutes, Premier League only, with a minimum of 270 minutes (10%) played. Data from Opta/WhoScored.

So, he doesn't shoot very much, he doesn't contribute much to scoring, his passes are of average accuracy and creation, he's not a proficient dribbler, and he doesn't hit penetrating long balls very often. Fair enough, maybe it's his defensive qualities that make him valuable.

Perhaps there's some intangible quality he brings to the side but at this point I'm just not sure what that is. He's not especially tidy in possession (dead middle on the team in times dispossessed per 90, behind James McCarthy), and if he's great in transition it's not coming through in his key passes or expected assist numbers (or on the tv screen for that matter).

Of course, this happens a lot in football. Players peak early. What we once thought was a glimpse of their potential was really their whole potential. That early potential tends to buy such players a few more years of leeway but most managers, directors of football, etc. eventually recognize these types of players either as dead-ends or suited only for specific roles.

Then we have Roberto Martinez. Now, it's fair to note that Cleverley was a free and came without risk. It's also fair to note that Martinez once called Paul Scharner one of the best center backs in Europe, so we probably shouldn't take his quote about Cleverley too seriously. Then again, you have to wonder what a player like Cleverley is offering the team, why the manager would go out of his way to get him in the lineup, and what it tells us about Martinez.

This brings me back to Sunday's match. My positive reaction to seeing Cleverley's name along with two ostensible wingers on the team sheet reflects how excited I was to see him in his supposedly "natural" role as a central midfielder instead of stuck out wide left. Yet I then found myself asking what exactly he was going to be doing in that role that McCarthy and Barkley weren't already doing. Eventually I sort of landed on "why is this guy even here?"

The upshot of all this is less about Cleverley himself–he seems like a perfectly fine person and a good teammate–and more about Martinez. His love of the midfielder is just another in a long line of mysteries that can be loosely filed under the category of "is he watching the same games we are?" Ultimately it's his job to sort this team out and get results, and it's often said that admitting you have a problem is the first step. The optimistic side of me sees the changed formation against United as something of a pragmatic step, a sign that Roberto knows he must change something, but the pessimistic side sees decisions like the continued usage of Cleverley as a sign that he really isn't learning anything.