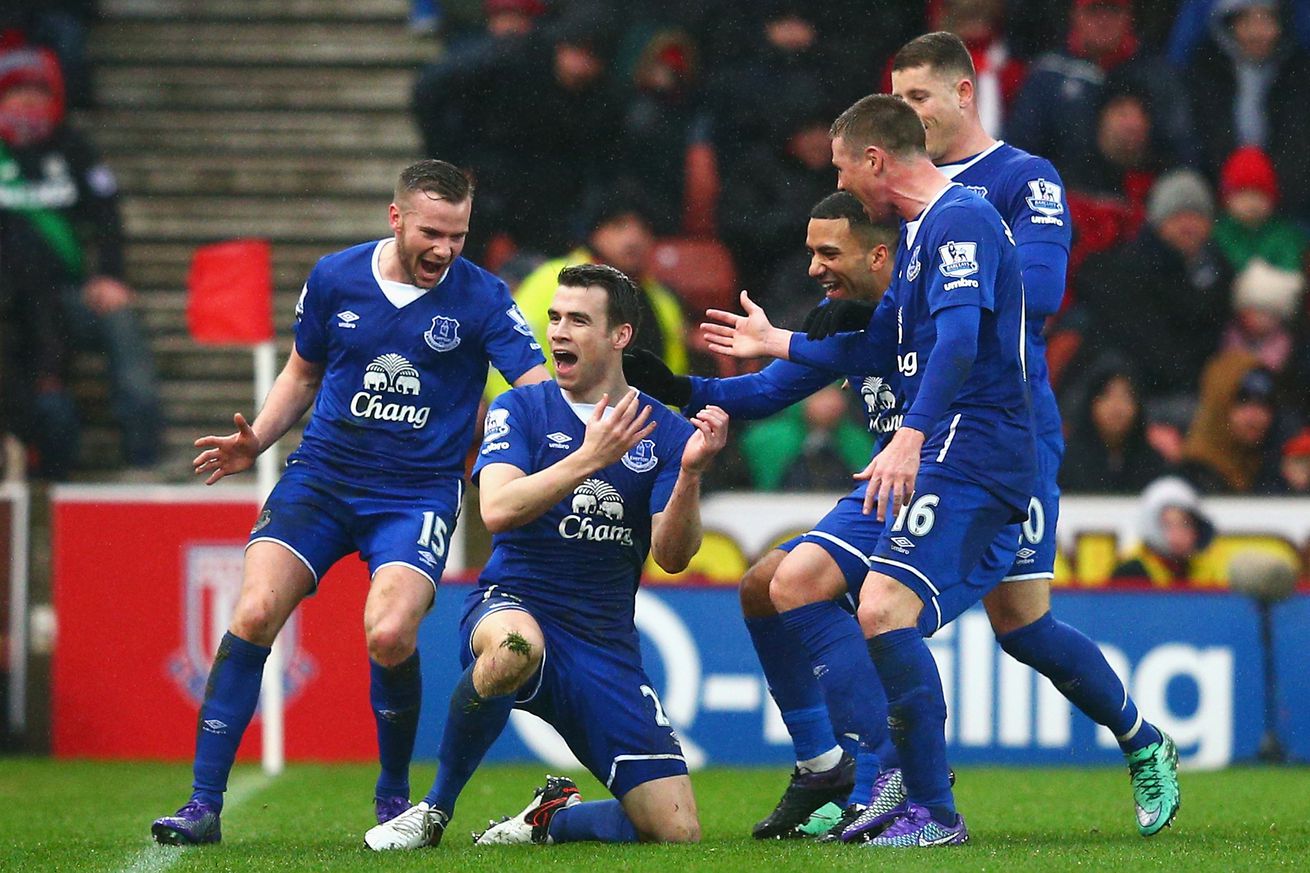 Everton may not have "solved" their defensive woes, but they are hitting a vein of good form and have a favorable fixture list on the horizon

Two weeks ago, things looked pretty grim around here. Everton had just been dumped out the semi-finals of the Capital One Cup, they were leaking goals like a sieve, and I wondered aloud if they were regressing under Roberto Martinez. Of course they then went ahead and won each of their next three fixtures 3-0.

As fans we want to know if this is a sign of actual change, or if it is simply a continuation of the usual ups and downs from a team that can seemingly do any amount of good or bad on any given day. What really jump out are the clean sheets. I've harped on Everton's defense over and over and over again, so to see them this comfortable for two hundred and seventy straight minutes seems like a miracle.

Without a doubt, the rearguard has looked solid as of late. I noted in the last piece that Everton were actually on a decent defensive run in terms of expected goals against. In other words, they've been better recently at not allowing opponents to create quality chances. Specifically I compared each opponent's average expected goals (xG) per game to their xG against Everton and found that since the 2-3 loss against Leicester City almost two months ago, only Newcastle (the December fixture, not last week's match) and Chelsea had been able to create more against Everton compared to their average.

That trend has continued. Everton's last three opponents, Swansea City, Newcastle, and Stoke City, managed only 1.3 xG combined against the Toffees according to Michael Caley's model (Swansea were quite fortunate to grab their two goals, and even more so to win the match). That's as good as a three-game defensive stretch as Everton have had all season.

In general, the recent form is encouraging:

xG numbers have been below average for a little while now, and actual goals are starting to follow as well.

There are supporters out there who will tell you that it's no coincidence that in three matches without Tim Howard in goal, the team has recorded three team sheets. In truth, Howard is probably not nearly as bad as you think he is, and Joel still has way too small of a sample size to lend himself to serious judgment.

What's a bit more interesting has been John Stones's absence from the lineup, as well as Phil Jagielka's concurrent return. While Stones had been ever-present for the most of the season, Everton's success in the last three fixtures perhaps lends an argument to those who believed that his dipping form in mid-January warranted a break from the starting lineup. With him set to come back from injury, one wonders if Martinez has a selection dilemma on his hands.

With that in mind I took a quick look at Everton's defensive numbers with Everton's three different center back pairings this season:

On this analysis, it appears that Stones/Jags pairing is somewhat suspect, and that Funes Mori probably deserves to keep his place alongside Jagielka, at least for the time being. I don't necessarily mean to call out Stones though–his individual numbers are still okay:

A caveat to keep in mind here is that xG is a team defense stat. By using it to look at center backs, we are simply saying that the team allowed this quality of chances while the player was on the field (thus still leaving open the question as to what actual effect the player had on his team’s ability to prevent chance creation).

With that being said, the team gives up a lot of goals with Stones on the pitch, but those numbers come down once adjusted with expected goals and strength of opponent. While we're on the topic of Stones, Mark Thompson at Every Team Needs a Ron put together a solid analysis of the young Englishman about a month ago that's worth reading.

My larger point here is that recent defensive form is probably not down to Martinez finally finding the right personnel, the right partnerships, or the right tactic. (If you're curious about James McCarthy's return, for example, his defensive numbers have been all over the place this season). It remains a fact that Roberto simply does not set up the team to emphasize defending. This is demonstrated nicely here by Henry Trotter (who also happens to be Royal Blue Mersey's latest recruit – welcome!). Most notably, the team lacks positional discipline and can get into trouble because of it.

Thom Lawrence over at Deep xG has been doing some pretty intelligent analysis of defense recently, and has come up with an amusingly-named metric called possession adjusted territorial control held, or PATCH. It's worth heading to the article and checking out the nuts and bolts, but in his words the main idea of PATCH is that the bigger the territory and the better you protect it, the higher you'll score.

I bring it up here to note that in looking at Premier League teams, Lawrence found that Everton rank fifteenth in the league in PATCH. Perhaps more alarmingly, they are near the very bottom in total team defensive territory, and consequently allow the second most progression outside of their defensive territory. Here defensive territory is essentially the space within which players record defensive actions. In very simple terms, this implies that Everton do a bad job at preventing opponents from progressing the ball. Put another way, they are easy to penetrate. I don't think that anyone who was watched the team this year can have too many arguments with this particular analysis.

Everton, then, seem for now to remain a somewhat unbalanced side that emphasizes attack and fluidity, sometimes at the expense of defense and structure–beautiful but flawed, if you will. It cannot be ignored that their two recent league clean sheets have come against two teams in the bottom five in the league in expected goals.

However there is reason for optimism: the team is undeniably talented, the league table is packed together like sardines, and the next five opponents are all bottom-half teams in terms of chance creation. The prospect of West Brom, Bournemouth, Aston Villa, West Ham, and Sunderland will hopefully not be keeping Gareth Barry up at night. While we shouldn't necessarily interpret the past ten days as a sign of a huge turnaround, this season isn't over yet.